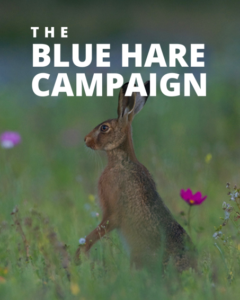 Our Co-Founders initiated the campaign for a close season for hares in 2011 shortly after launching the Conservatives Against Fox Hunting campaign .The initiative developed into the Blue Hare campaign.

We approached Neil Parish MP, the then Chairman of The Associate Parliamentary Group For Animal Welfare( APGAW) in the House of Commons in May 2011 to introduce the need for a close season at least for hares due to their vulnerable population status. We were delighted Neil Parish  supported our proposal from the first meeting and asked a Parliamentary Question concerning hares on our behalf which was answered by Richard Benyon MP, the Minister at DEFRA in June 2011. The Hare Preservation Trust and Humane Society International UK also became involved with our push for hare protection in November 2011. Care For The Wild International joined our campaign in June 2012 and we all worked daily for a close season for hares in Westminster. Over 146  MPs supported the EDM for a close season for hares.

In 2012  we organised the very first hare protection Parliamentary Event  to be held in the House of Commons with Humane Society International UK, hosted by cross-party MPs Neil Parish  Angela Smith and Adrian Sanders to highlight the need for a close season, an event which attracted the interest and support of 14 cross-party MPs. Conservationist Bill Oddie joined the event.

Voluntary schemes are extremely hard to police or monitor, and they offer no opportunity to use punitive measures in order to encourage compliance. In addition, we do not believe that a voluntary scheme would act as a deterrent to those who poach or course hares illegally.

While we welcome any initiative that reduces the level of persecution suffered by hares, we are strongly of the opinion that only a legally binding close season can offer real protection for hares during their breeding season.

Its time for a close season for hares